YOSEMITE WITH CAMERA AND FAMILY

This trip started out as a photo trip which I wanted to do in Yosemite National Park. I planned on a five day trip in April for an early spring trip to the Park. I asked several photography friends to join me, but for various reasons no one was available.  So I brought up the subject with George and two daughters. Tina in Ohio thought she might be able to join me, but Klara, in Montana would be starting her work season then so she was not going to be available. George was welcome though he does not enjoy the long stops at locations while I visit various view points and angles of a subject.

Tina was able to finagle the time off and part of her airfare with her company. George agreed to join me, as Yosemite is a favorite location for all of us, and it would be fun to share it.

We were off about 0700 with breakfast on the road of home made sweet pretzels, and coffee from the local 7/11. Tina would meet us in Yosemite at Tunnel View, after a flight into Fresno from Ohio.

Our drive went smoothly though the traffic from I-15 to I-5 was busy with little respite from the early morning traffic heading for Los Angeles. Once on the I-5 the road opened up and we sailed onto Fresno where we then headed for El Portal, the gateway to Yosemite from the South, and our hotel. Once we were checked in, we headed to the Park and our sunset time rendezvous with Tina. 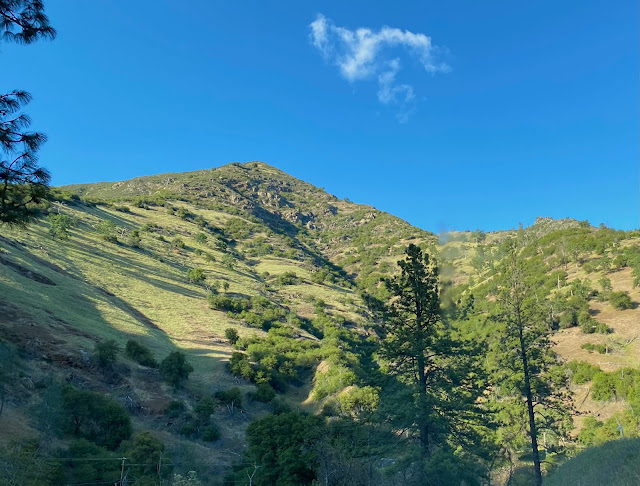 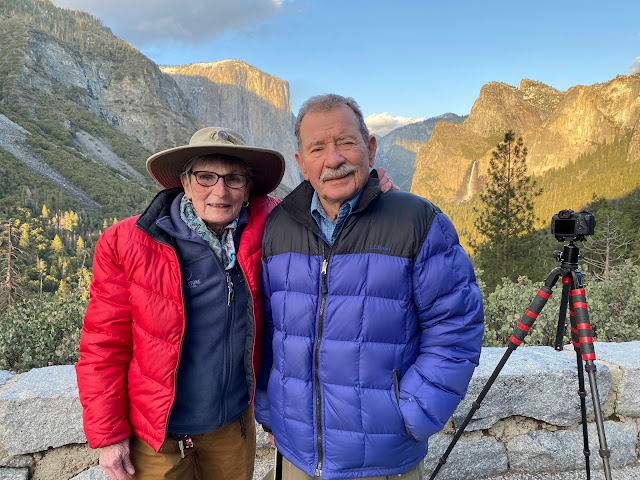 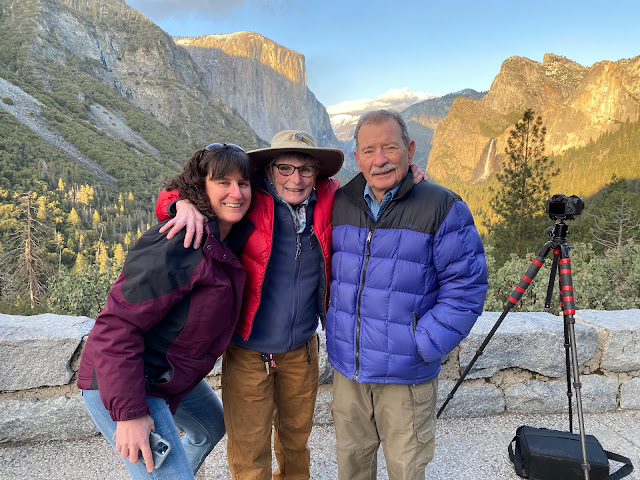 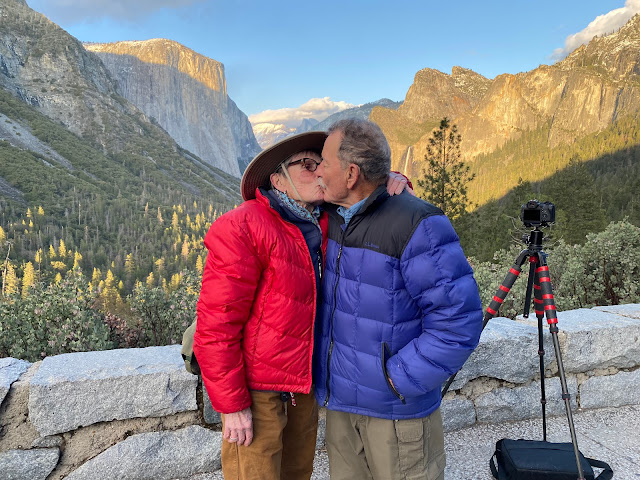 At Tunnel View I set up my camera in preparation for sunset which was fast approaching. Tina showed up and we enjoyed the moment of our getting together. Minutes later there was another greeting as Klara had joined the party!! 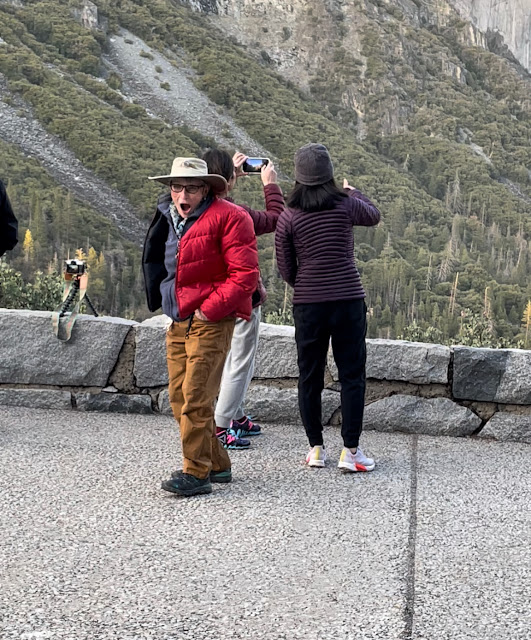 WHAT? A SURPRISE!!
What a surprise and delight. The four of us in Yosemite. After capturing the last light in the Valley 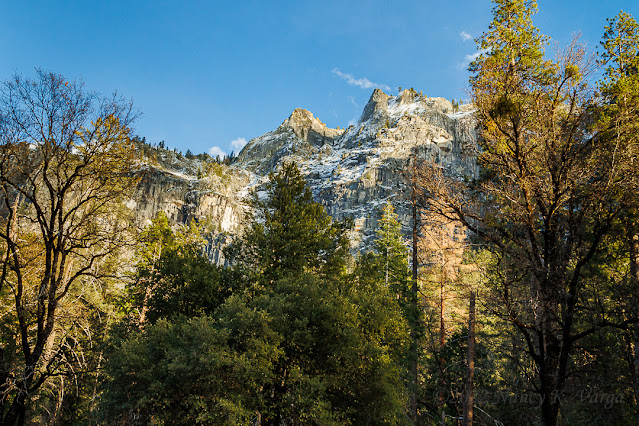 HIGH ABOVE THE VALLEY 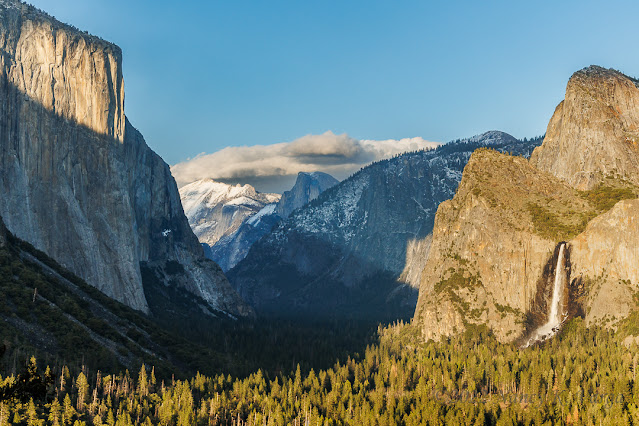 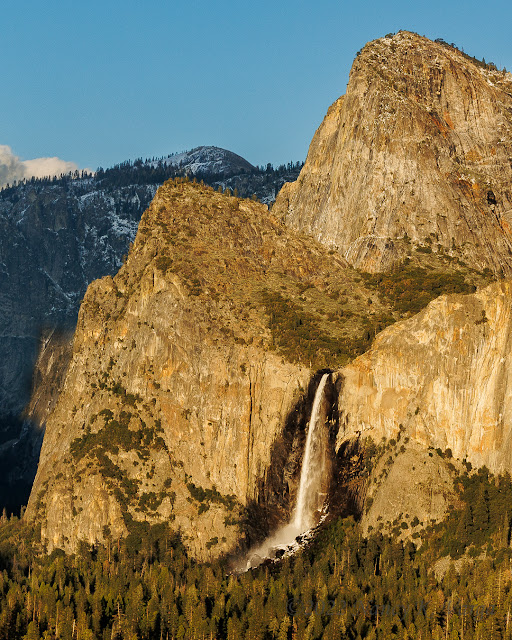 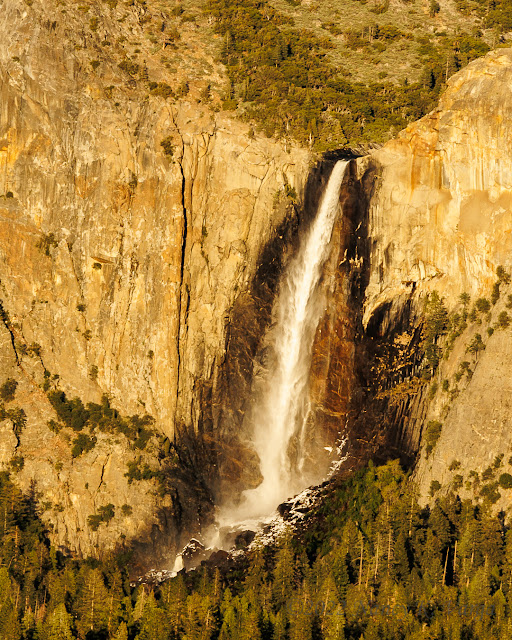 WHY BRIDALVEIL FALLS HAS ITS NAME

We then headed back to our Hotel and dinner, and the telling of the details of Klara's inclusion into the week.

Klara was able to join us as there had been a snafu with her being signed into her work, and so she would have this week off while the Forest Service straightened things out.

When she realized it she quickly made plans to join us, getting a flight to Fresno, and reserving the last room available at our Hotel. She and Tina kept the secret until we met at Tunnel View. It was a wonderful surprise to say the least.

After the travel day yesterday we enjoyed a Varga breakfast in our room of sweet pretzels, fruit, and coffee and tea. We then headed into the Park for a full day of wandering and photography.

Our first stop was a waterfall on the North side of the road which was flowing well. I do not know the name of it, but I have stopped here several times in the past.

Once in the Valley we stopped for views of the Three Brothers, El Capitan, Cathedral Rocks, etc. We stopped in the area of Sentinal Beach and roamed around the area. It has become a burn site, before moving onto the area of Swinging Bridge. We used it to cross the Valley to the North side and a bit of hiking. Back near the Southside Drive we enjoyed a picnic.

Then it was onto Sentinel Bridge, and views from the valley of Washington Column, Royal Arches, and views of Yosemite Falls. The evening shoot was from Valley View.

A wonderful day finished with dinner at The River restaurant in El Portal.

This morning we were up early to get the early light around Lower Yosemite Falls. It was a wonderful time as there were only a couple of people in the area at 0700. We all enjoyed the experience. One of the attractions at this time of the morning was the rainbow which is captured in the spray of the Falls due to the sun's angle. 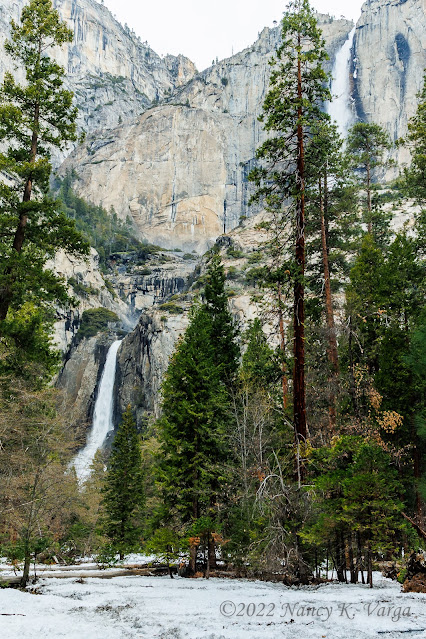 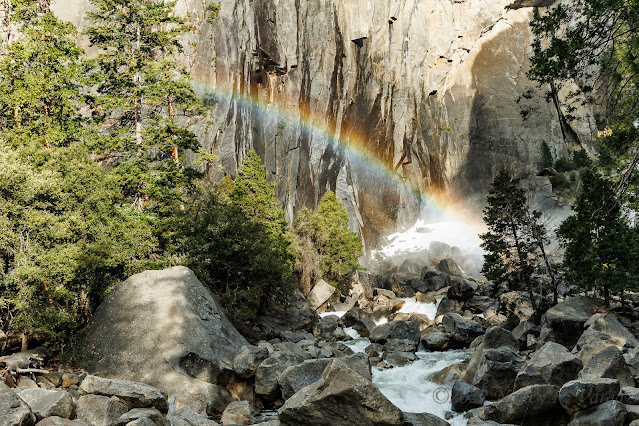 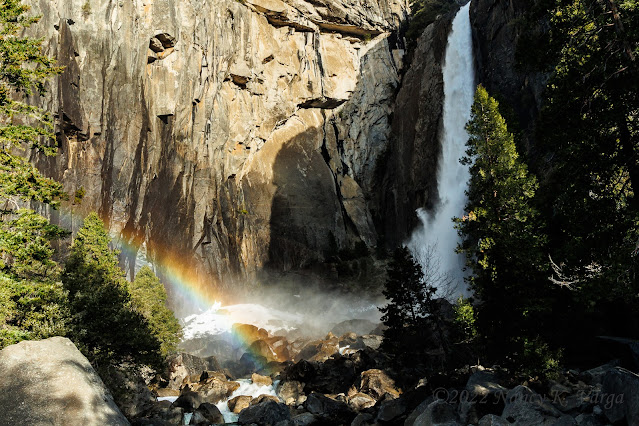 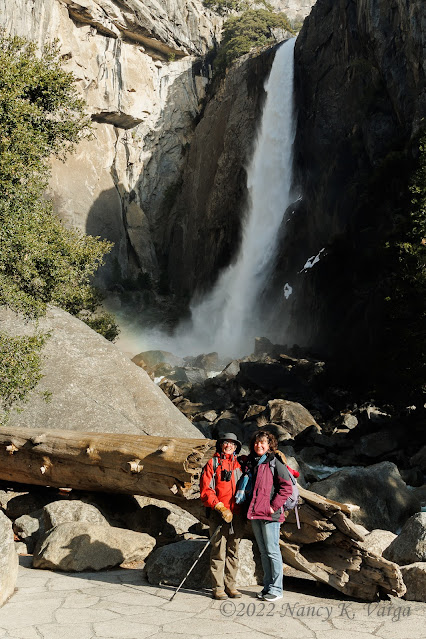 KLARA AND TINA AT THE FALLS 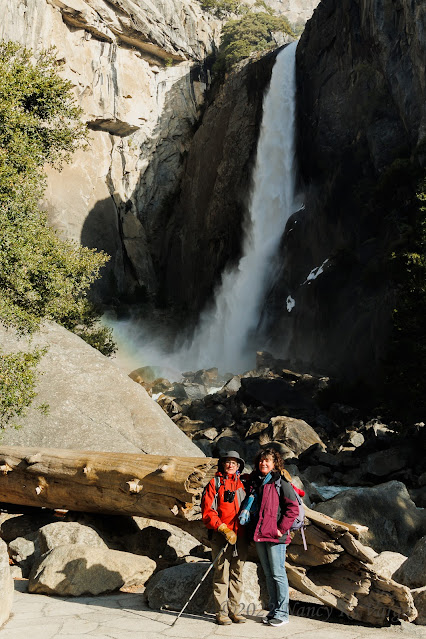 After an hour there we headed to the Village to find some breakfast. We settled on breakfast at Degnan's Deli. This filled the bill for us all, before we headed to the Ansel Adams Gallery, and The Village Store. We browsed the store for unnecessary souvenirs, and I came away with a new t-shirt.😀

The girls and George went on a walk toward Mirror Lake while I strolled along a valley path with camera in hand. Did not find  much to photograph but I enjoyed the quiet walk in the Valley. Afterwards we met back at the car and headed to the Ahwahnee hotel to get out of the wet weather we were experiencing.

We wandered about the building visiting the Gift Shop, the Ladies Room, the bar, the card room, and the large lounge room across from the dining room, which are both magnificent. We warmed up in front of this magnificent fireplace.

The Lounge used to have two Steinway pianos, now they only have one.The two just looked like they belonged and did not crowd the room. We enjoyed some hot beverages as well some of our own snacks. It was very relaxing and a pleasant way to spend the wet afternoon.

We then headed for Tunnel View where the weather was cloudy and I enjoyed photographing the play of of clouds moving through the Valley. It was fun trying to find compositions that were telling. I am trying to process some in Black and White. (It is struggle.) 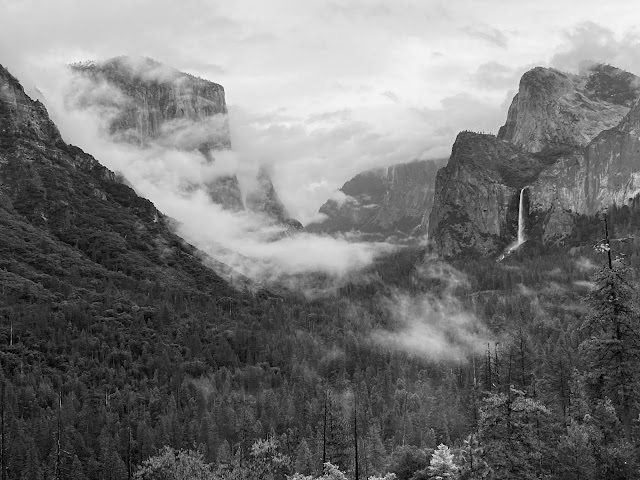 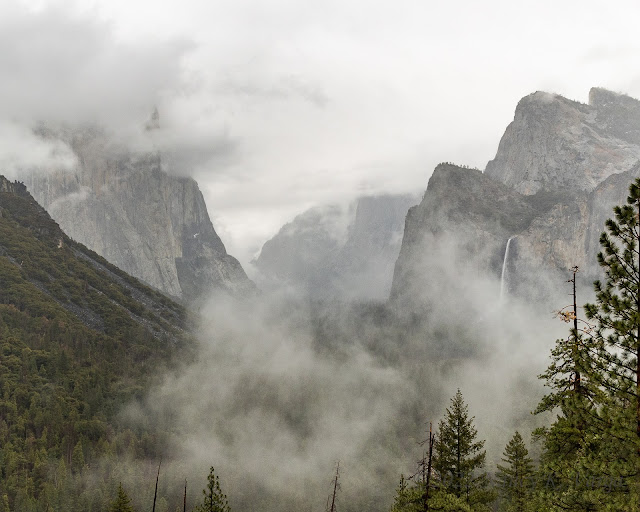 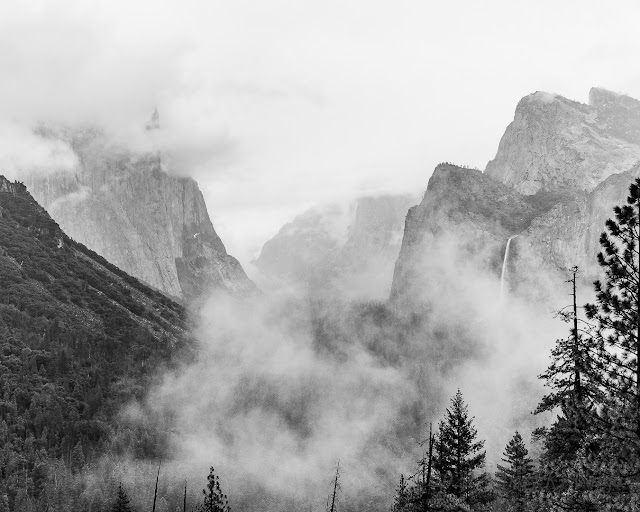 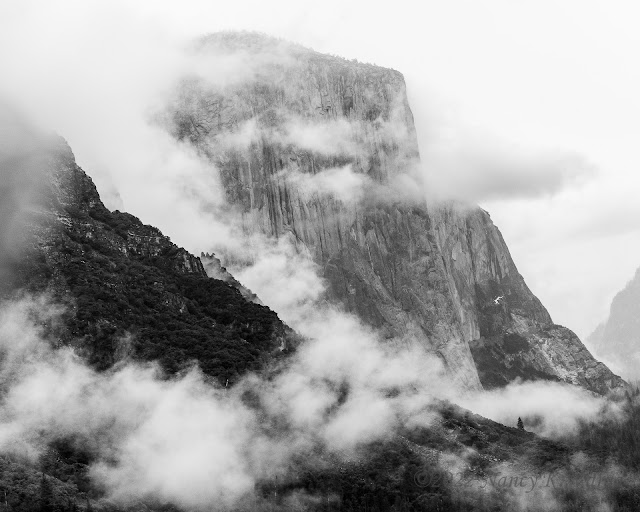 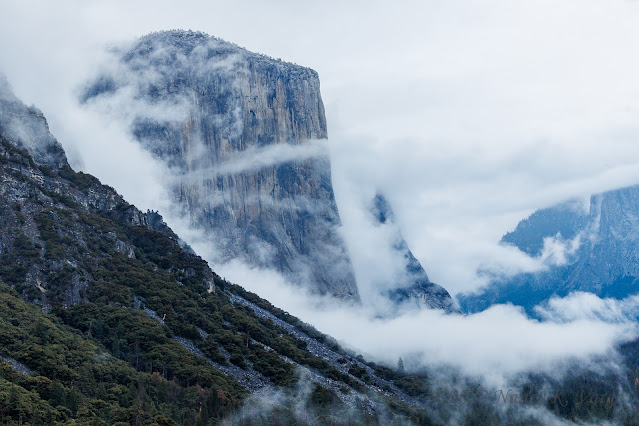 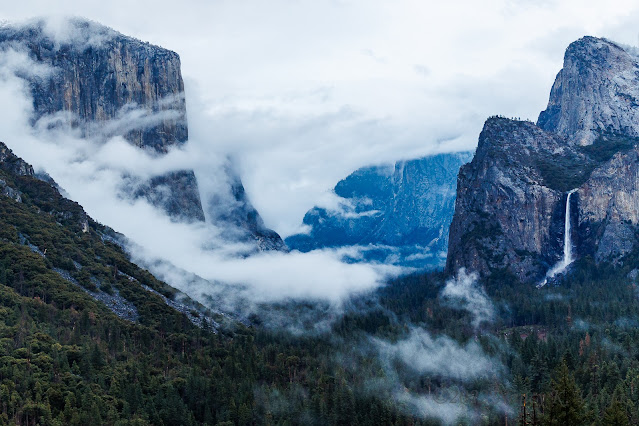 (What do you think?)

This morning we headed to the Ahwanee for breakfast. I did not know that we were celebrating my 82 and 1/6th birthday.😎 We enjoyed a delicious breakfast buffet that included Eggs Benedict which is one of our favorites. They had several other unique items which were all delicious. I was gifted with a new coffee mug with a Raven design from the tribes of the Northwest. 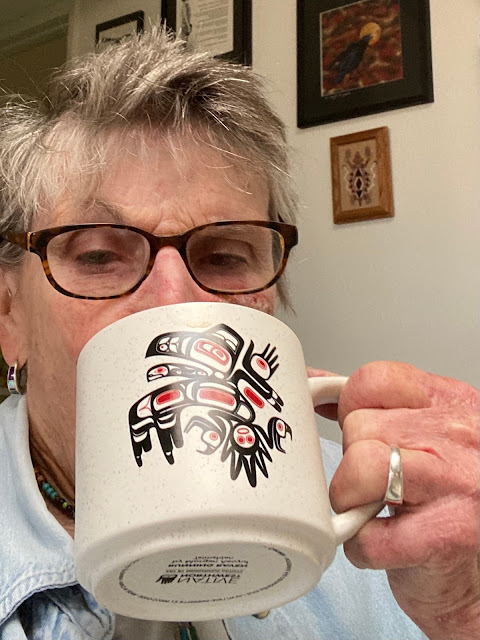 Afterwards we headed off for some hiking. The girls started for Mirror Lake, whiIe I and George followed at a much slower pace. The Park is still opening it's Spring bloom and color.

Probably the first or second or third week in May would really see Spring in full bloom in the Valley. We then headed for El Capitan meadow for some watching of the climbers on El Cap., a picnic lunch and a nap. 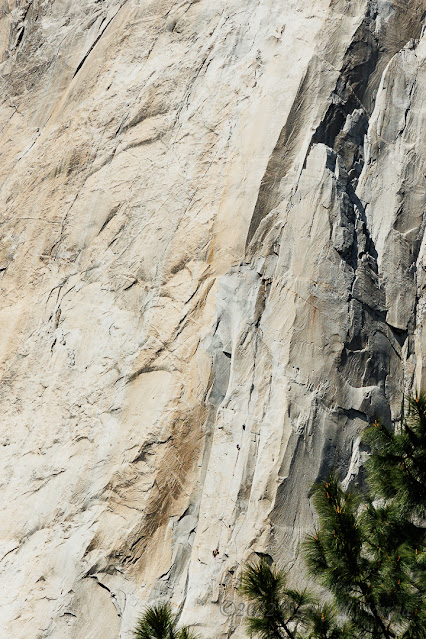 Shortly there after the girls headed for Fresno for making their flight connections home early Saturday morning.

On the way to Sentinel Bridge to capture Half Dome in early evening light we stopped at Fern Spring for a photo. This spring has in the past been a source of drinking water to any who stopped. Regrettably there is now a sign saying it is not palatable.😢 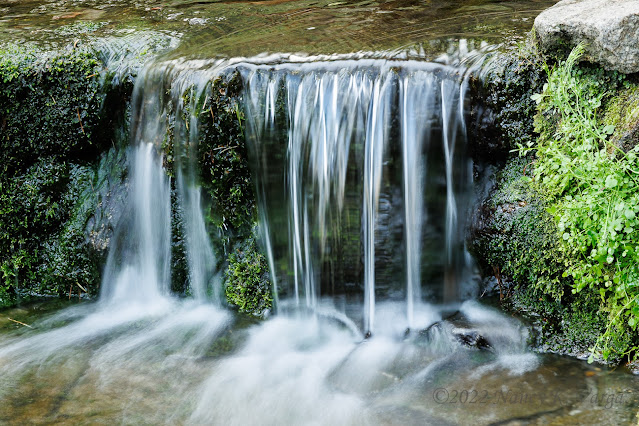 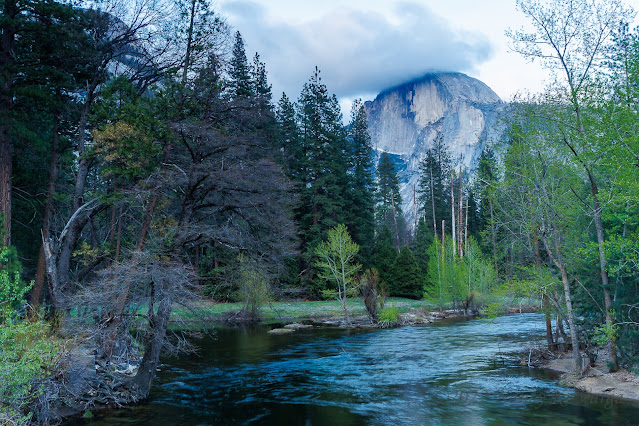 HALF DOME FROM SENTINEL BRIDGE

Then it was time for us to say farewell to the Park, and return to El Portal for the evening.

More weather today. As we set off for San Diego it was raining,  and continued until we summited at Chinquapin. Along this leg we experienced rain and snow as well as fog.

As we slowly descended to  Wawona the weather opened up and we had no real problems reaching Fresno where we refueled both us and the car before getting on US 99 and  heading for San Diego.

This was the Saturday before Easter and there was lots of traffic. I had taken over driving in Fresno but relinquished it about an hour later as I was getting drowsy. George took over and had the busiest leg through the Los Angeles area to the I-15. We still made good time and were home by 1745. After unloading the car we went and picked up Sierra who was quite happy to see us though she had a good time with her friend Zeke, an  American Staffordshire Terrier, that lives a few houses below us. 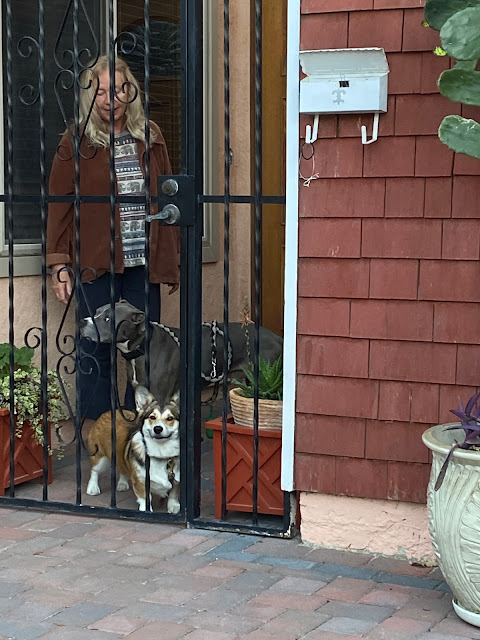 SUMMARY: This was a great trip especially  since both girls were able join us. It was not so much a photo trip as a result, but I had a great time with my camera. And we all enjoyed the time together in Yosemite.